Couscous is traditionally steamed over the pot in which the meat and vegetables are cooking, and is more toothsome than the instant varieties generally available, but it's become nearly impossible to find.  I FINALLY found some TRADITIONAL, ORGANIC North African couscous at Chefshop!  (They also sell harissa, if you don't want to make your own.)

Rather than steam it in a couscousier, which is a real pain, I followed the recipe on the Chefshop website, purportedly from Joyce Goldstein, and it worked like a charm.  Her recipe uses 3 cups of couscous but I've dropped it down to 1 cup, which is easily scaled up.


How to cook North African Couscous Without Steaming 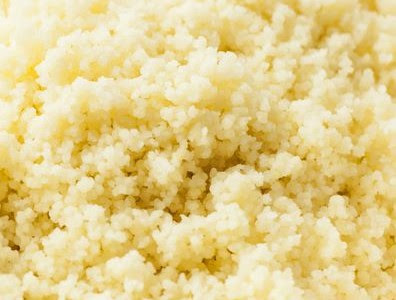 Spread couscous in a flat bottom pan.  Bring the water to a boil and season with EVOO and salt.  Pour over couscous, cover with plastic wrap, and let it sit until absorbed 10-30 minutes.

Rake with a fork, or break up with your hands, and serve immediately.

This recipe, also from Paula Wolfert's book Couscous and Other Good Food from Morocco, is usually made with beef or lamb, but I needed it to be vegetarian so I eliminated the meat, doubled the vegetables, and added a few spices to compensate for the lost umami.  I found no meat-free couscous recipes in her book and had to improvise.
I've made this several times now and use whatever vegetables I have on hand - radishes, green beans, butternut squash, etc....  The only veg you must have are garlic, tomatoes, onions, carrots and zucchini. 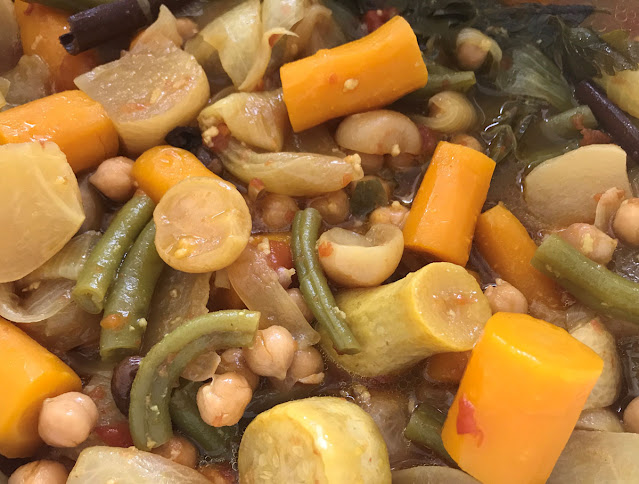 In a large stock pot, melt the butter or ghee over medium heat and add the spices, herbs, garlic, onions, and tomatoes.  Cover and cook gently for 10 minutes.  Add 2 quarts water or vegetable stock.

(If you're using dry chickpeas, add the soaked and drained chickpeas here.  Add an additional 1 quart water, cover and simmer for 1 hour.)

Add the carrots and turnips.  Cover and simmer for 30 minutes.

Add the zucchini, fresh chili pepper, raisins and canned chickpeas.  Add another quart of water if necessary to keep the vegetables submerged.  Cover and simmer another 20 minutes. 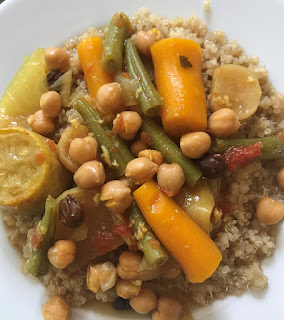 Dump the couscous onto a serving dish and toss with 1 T. butter or ghee.  Spread out and form a large well in the center.  With a perforated spoon, transfer the vegetables into the well.  Add the cooked pumpkin/potatoes.  Taste the broth for seasoning, adjust and strain.

Moisten the grain with the remaining broth.  Serve with Harissa Sauce.


* If you want to use dry chickpeas, soak 1 cup overnight in 4 c. water, then drain and cook for 1 hour in the tomato/onion broth before adding the carrots and turnips.
** Couscous is normally cooked in a colander OVER the simmering vegetables.  Because that requires special equipment, I prefer to cook the grains in a separate pot using the broth from the vegetables.  Once the vegetables are cooked, I skim off enough broth to cook the grains, and keep the vegetables warm while they cook.  In the photo below, they're shown over quinoa.

There has been lots of chard in the farm store lately, so I Google'd for recipes and found this, which sounded delicious to me.  In reality, it was addicting!  I couldn't get enough of it.

Once again, I combined two recipes, adding the chard from the first, and using the second for the seasoning and easier cooking method.  If you don't use chard, the second recipe is much easier overall. 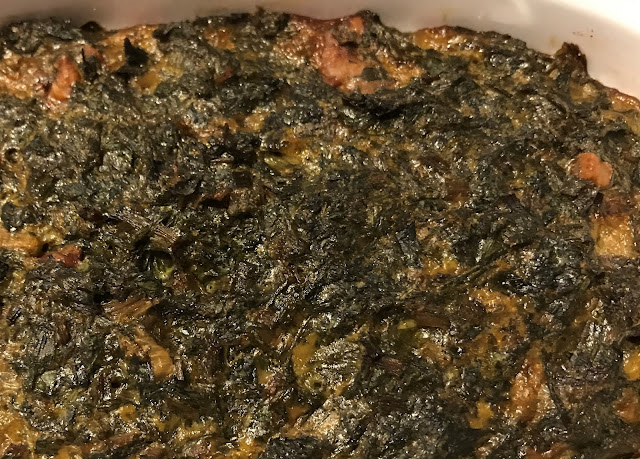 
Position an oven rack in the upper-middle position and heat to 375F.  Fit a piece of parchment paper into an 8" square or 9" round cake pan (original recipe calls for cutting the paper to fit the bottom of the pan, but my cake pans are aluminum and I didn't want the fritata touching the sides so I just folded and pressed the parchment to cover the sides as well.  I didn't coat the paper with EVOO and had no trouble removing it.  The second time I made this, I baked it in a ceramic baking dish with no parchment and had no trouble removing it).

Saute the chard leaves in 1 T. fat until wilted.  Remove to a strainer.

Add another 3 T fat to the pan and saute the sliced leeks and chard stems over medium heat until tender and translucent.  Stir from time to time, add a splash of water if needed, or cover with a piece of parchment paper to entrap steam and prevent color from developing.

In a food processor, combine the cooked chard leaves, parsley, cilantro and dill with the remaining 3 T. fat and process until finely ground.

When the leeks and chard stems are cooked, add them to the greens.  Let everything cool a bit and then use your hands to mix everything evenly.  Taste and season generously knowing you're about to add a bunch of eggs to the mixture.

Recipe can be prepared ahead to this point.  Greens can be refrigerated for 3 days.

In a medium bowl, whisk the baking powder, cardamom, cinnamon, cumin and pepper.  Add 2 eggs and whisk until blended, then add the remaining eggs and whisk until just combined.  Fold into the herb mixture.   Add walnuts and cranberries if using.  Pour into prepared pan and smooth the top.

Bake in 375F preheated oven until the center is firm, about 20-25 minutes.

Let the kuku cool in the pan fro 10 minutes.  Invert the pan onto a plate and peel off the parchment.  Slice and serve warm or at room temperature with a dollop of yogurt or labneh (yogurt cheese).

* if you don't like cilantro, eliminate it and increase the other herbs by 1c. each.

The original recipe is from Paula Wolfert's book Couscous and Other Good Food from Morocco.  I used her seasoning mix but changed the procedure somewhat.  In Morocco, the meat is kneaded to produce a fine texture; I used the food processor.  You can make these without the breadcrumbs and eggs but they will not be as moist. 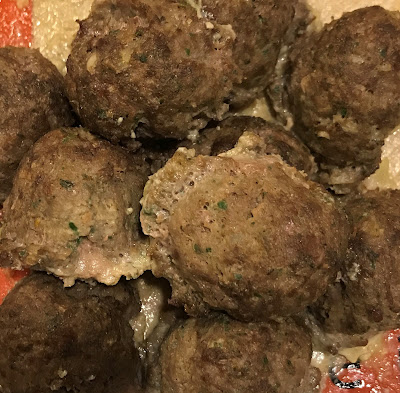 
In the bowl of a food processor, process the onions and fresh herbs until both are finely minced.

Add the meat and pulse to combine and grind the meat a little finer.  Don't  overdo it - the meat shouldn't be mush!

Set aside for at least 1 hour to let the flavors ripen.

Preheat oven to 400 F and position rack in center.  Line a jell roll pan with parchment or Silpat.

Using a 1.5" disher, drop meat mixture onto the lined pan.  By placing them fairly close together I can get 60 meatballs onto one 12 x 17" pan (they're going to shrink, so they can almost touch).

Remove and let cool for a minute or two, then serve.  We like to dip them in Cilantro Jalapeno Sauce or harissa mayonnaise.

This unusual roasted-red-pepper-and-walnut concoction can be used as a dip, a sandwich spread, a pasta/pizza sauce, or a vegetable garnish!   I've wanted to make it for sooo long, and finally have all the required ingredients, like homemade pomegranate molasses and organic EV Spanish olive oil. 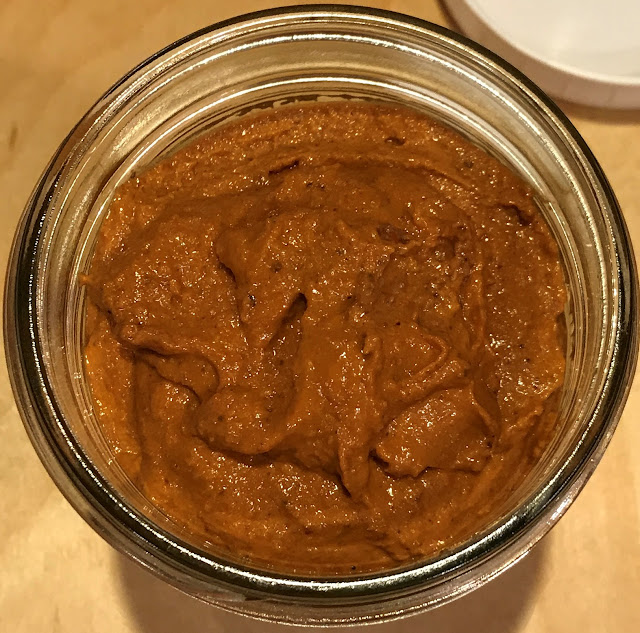 1. Add the breadcrumbs and walnuts to the bowl of a food processor or high-speed blender and pulse until the walnuts are finely chopped.

2. Add 1/2 the olive oil and the remaining ingredients and process to a puree.  If it's too thick, add the remaining olive oil 2 T at a time.   The dip will be smoother if you use a high-speed blender.

There were lots of peppers in the farm store today so, when I found two packages of chicken breasts in the freezer (while trying to make room for 1/2 a pig), I decided to make chicken fajitas knowing I had this delicious cilantro-jalapeno-sauce in the fridge to drizzle over them.  The sauce is spicy so the chicken has very little heat.  If you want more heat, leave the seeds and ribs in the jalapenos.  If you don't have banana peppers, leave them out.

Fajitas are usually grilled, but that's a hassle, so I've found a way to make them on the cooktop.  The chipotle powder adds a bit of smoke flavor.

I buy our chicken breasts from Grassland Beef. 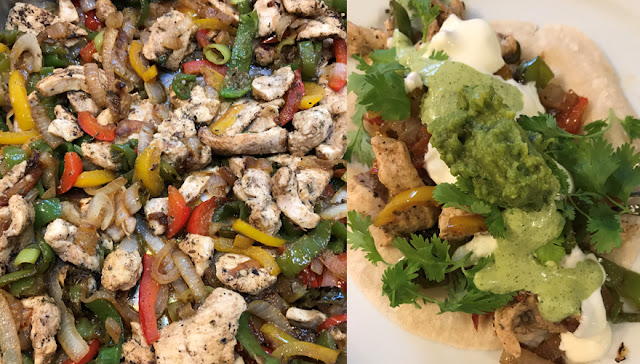 Heat the tortillas (we use the toaster over) and keep them warm, wrapped in a dishtowel.

In a large saute pan, melt 2 T fat over high heat and add the onions and peppers.  Stir to combine and then let them fry, stirring only once or twice until they're slightly charred and slightly softened; you don't want them limp.  The bottom of the pan will also be slightly charred.  Turn off the heat and let the onions and peppers sit in the charred pan while you prepare the chicken.

Mix all the seasoning together in a small bowl or custard cup and set aside.

Slice the chicken AGAINST THE GRAIN into 1/4" slices.

Leaving the onions and peppers at the side of the pan, cook the chicken in the center, flipping and stirring, until it's barely cooked - don't overcook it or it will be tough!  You should see small areas of pink-ness.

Mix the onions and peppers into the chicken.  The chicken will finish cooking while you do this.  Reduce heat to low and keep warm while you serve it:

Place a warm tortilla on your plate, mound the fajitas on top, drizzle with sour cream,  cilantro-jalapeno sauce, and guacamole, and sprinkle with fresh coriander.


* Due to the drought in California, there is a shortage of avocados, so producers are picking them too early and they rot before they ripen!  I've started buying prepared guacamole even though it is inferior and not healthy (I cannot find organic).