Rhubarb.  I rarely use rhubarb because so much sugar is required to make it palatable.  Imagine how excited I was to find a SAVORY recipe for it!  I actually found several rhubarb chutney recipes, and chose the one which had the lowest sugar-to-rhubarb ratio, and the most interesting seasoning.
The flavor profile of the spice combination is wonderful!  The texture is good, too, because the rhubarb isn't cooked into oblivion.  I made a few changes to the spice preparation, because I wasn't happy with their texture, and I changed the procedure to eliminate the use of one pot.
Original recipe: https://www.finecooking.com/recipe/rhubarb-chutney
Rhubarb Chutney 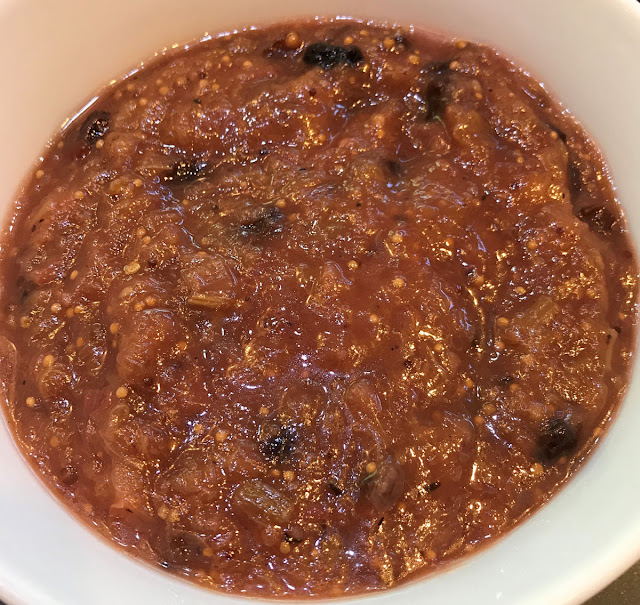 Makes 2.5 cups
Ingredients:
In a 3-quart pot, over medium heat, toast the coriander and fennel seeds until lightly browned.  Transfer to a small bowl and cool to room temp.  Grind in a mortar an pestle.
In the same pot, combine the vinegar bay leaves, ground coriander and fennel seeds, cinnamon, and 1 t. salt.  Bring to a boil over med-high heat.  Remove from heat, cover the pot, and let sit for 15 minutes for the flavors to develop.  Transfer to a bowl and wipe out the pot.
Heat the oil over medium heat.  Add the shallots, mustard seeds, and red pepper flakes and cook, stirring, until softened, about 5 minutes.
Stir the the honey and the reserved vinegar mixture into the shallots and bring to a simmer.  Cover and simmer for about 5 minutes to combine the flavors.  Remove the bay leaves and the cinnamon stick.
Add the rhubarb and raisins, and stir to combine.  Cover and cook over low heat, WITHOUT STIRRING, until the rhubarb is tender and starting to fall apart, about 10 minutes.  If you do stir it, you will break up the rhubarb and it will be mush.  DON'T OVER COOK IT!
Season to taste with salt and black pepper.  Transfer to a serving dish and cool to room temperature.
Serve with bread and cheese, cheese and crackers, salami and crackers, or cheese, salami and crackers!
The chutney will keep, covered and refrigerated, for 2 weeks.  It should not be canned.  There isn't enough sugar or acid to waterbath can it, and pressure canning would completely destroy the texture. 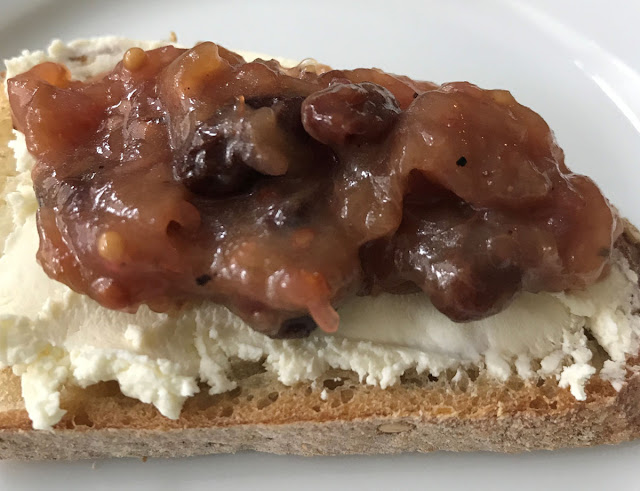 This recipe was given to me by my daughter-in-law.  It's delicious with chili and other tex-mex style meals.
Adriane's Tomato Salad with Coriander and Lime 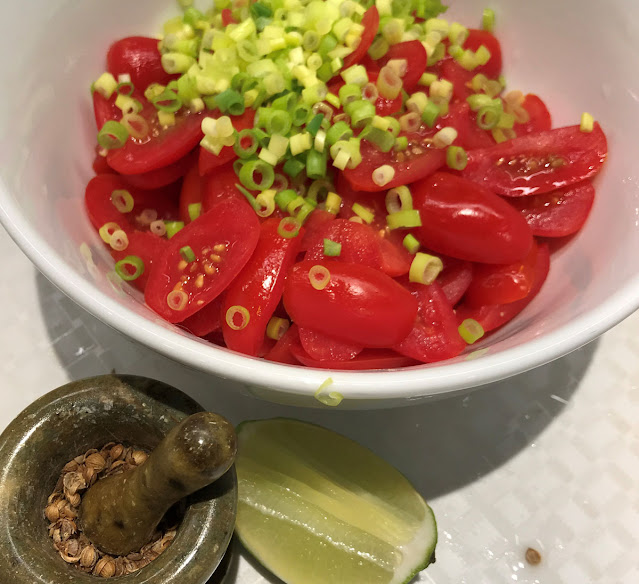 Serves 6
Slice the tomatoes in half.  Combine with the other ingredients and serve. 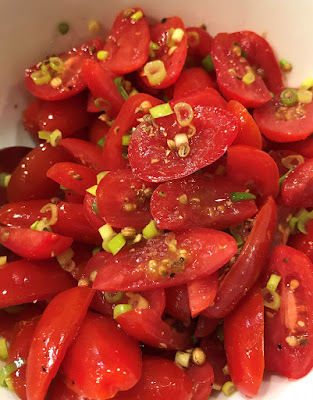 I created this recipe in an attempt to recreate the green chili served at The Red Lion in Vail, CO.  We haven't been to Vail in years, so I don't know how close this comes, but we enjoy it as an alternative to the heavier beef chili.  This version uses green tomatoes and green peppers.
Pork Chili with Green Tomatoes and White Beans 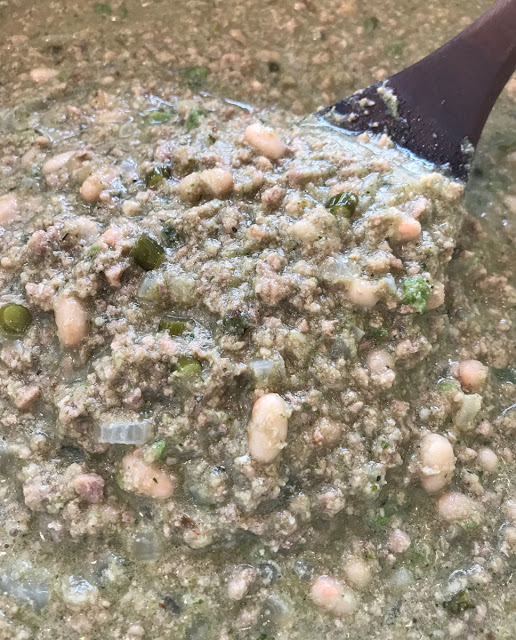 Serves 6
Ingredients:
If you're using garlic scapes, remove the flower bud and cut the stalks into 1/4" pieces.  In the photo above, I used garlic scapes.
Mince one of the onions, chop the other two onions.
Melt the lard over medium-high heat and saute the minced onion, and half of the garlic scapes if you're using them, until lightly browned.
Add the pork and the spices and stir well.  Add enough water to cover and simmer until most of the water has evaporated.
Cut up the tomatoes and add them to a blender jar along with the chopped onions, the garlic (or the remaining garlic scapes), and the peppers.  Puree
Pour the puree over the pork.  Add 2 teaspoons salt, add the beans if you're using them, and cook until most of the water has evaporated.
Adjust seasoning.  Depending on how hot the peppers are, and on your tolerance for heat, you may to add additional cayenne or jalapeno powder.
Serve with fresh cilantro, sliced scallions, guacamole, grated cheese, and/or sour cream. 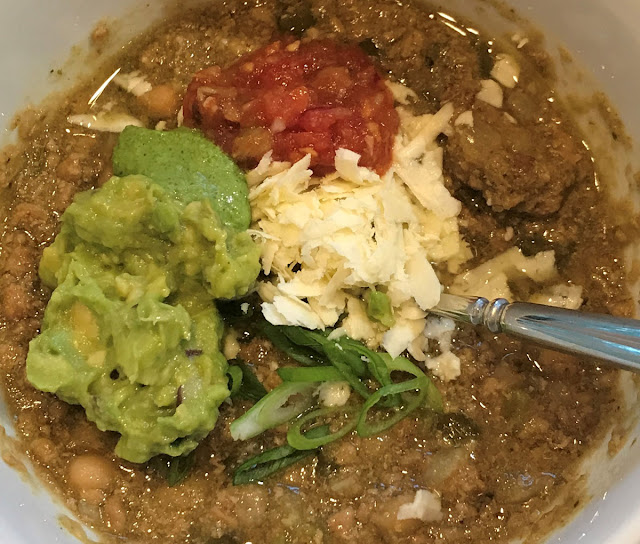 When you order this dish in an Indian restaurant, it's usually made with spinach (palak).  I've read that it can also be made with half arugula or and mustard greens (sag), but those aren't available in our farm store until later in the season.
Senposai, which was created by crossing leafy variety of wild turnip developed from Pak Choi, with regular head cabbage, is available now.  Senposai's large leaves are easy to wash, easy to cook and have a mild flavor. (https://www.gardeningknowhow.com/edible/vegetables/greens/growing-komatsuna-greens.htm)
I decided to use them instead and was pleased with the result. Senposai doesn't release much water as it cooks, and the leaves are thicker than spinach, so I adjusted the recipe accordingly.
Our farm store has also just started selling Haloumi, which can (and should) be fried before eating, so I used that instead of the labor-intensive paneer.  Paneer is richer and softer, Haloumi is denser and - as a friend put it - squeeky!
Sag-Palak Paneer with Senposai and Haloumi 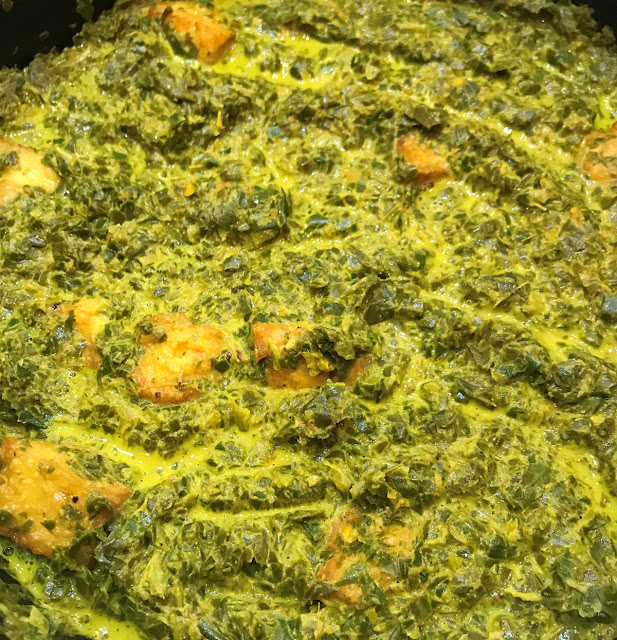 Puree the greens in a processor or blender and return them to the pan. 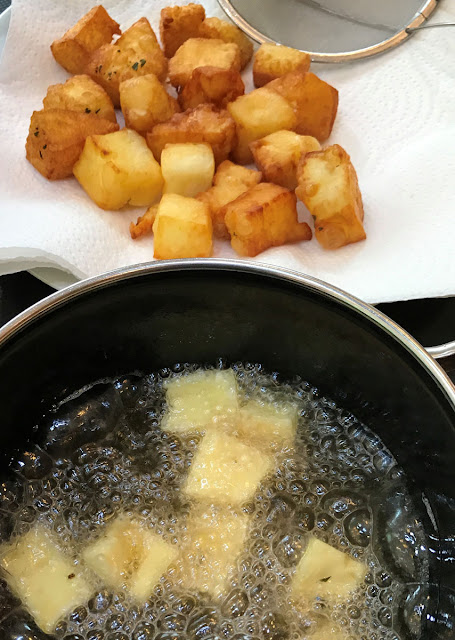 While the greens are cooking, fill a very small (1 qt) sauce pan with 1 c. coconut oil and heat to medium.  Fry cheese cubes 10 at a time, stirring, until lightly browned.  Drain on paper towels and set aside.
Mound the greens on a platter, sprinkle the cheese cubes over the top, and serve! 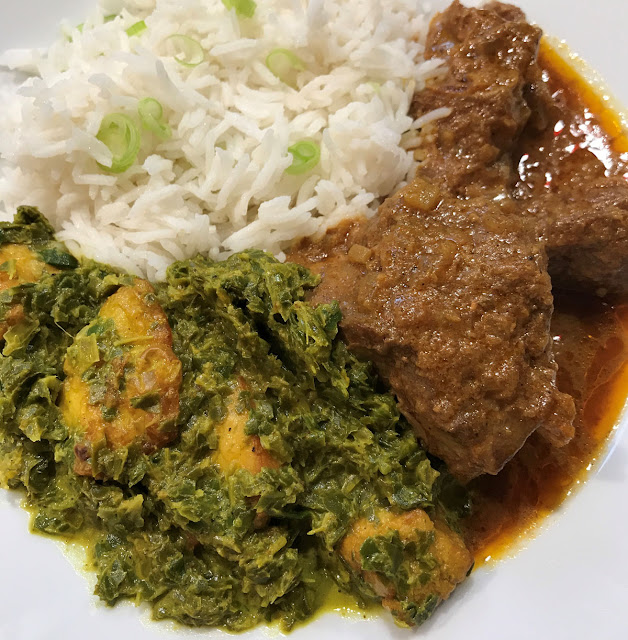 Sorry, I don't have a photo!  We ate this before I remembered I needed to take one.
This dip is delicious with carrot dippers!


Mix all together and chill overnight.  Adjust seasoning and serve with carrot dippers.
at June 12, 2020 No comments:

Our farm is now growing a new-for-us green, SENPOSAI, which was created by crossing komatsuna, a leafy variety of wild turnip developed from Pak Choi, with regular head cabbage.  Senposai's large leaves are easy to wash, easy to cook and have a mild flavor. (https://www.gardeningknowhow.com/edible/vegetables/greens/growing-komatsuna-greens.htm)

I had never cooked (or even heard of!) this vegetable so I searched for a recipe and found this one which tasted as good as it sounded:

Original recipe: Penne with Senposai and Feta
There was no photograph showing the greens-to-pasta ratio so I followed the recipe as written.  I made a triple recipe and used 1 large onion.  The next time I make it, I'll double the amount of senposai because I prefer a higher greens-to-pasta ratio.


Pasta with Senposai, Feta, and Olives 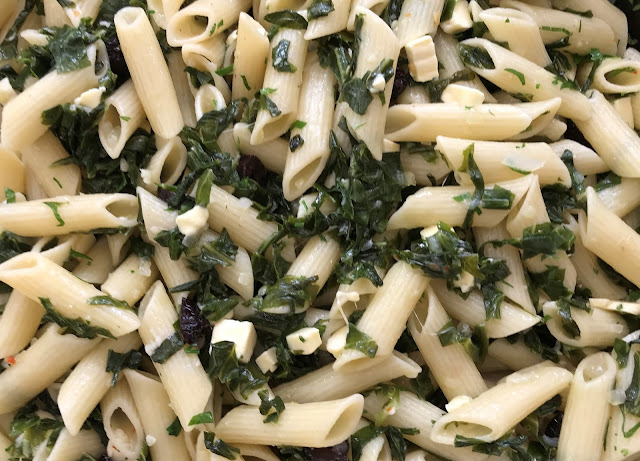 Bring a large pot of water to boil.  Add a generous pinch of salt.  Fill a large bowl with cold water.

Wash the senposai leaves, then remove the stem and center ribs (I used my hands to 'strip' them).  Chop the leaves into 1/2" x 2" pieces.  Blanch in the boiling salted water for 5 minutes, until they're completely wilted but still bright green. Remove with a slotted spoon or tongs to the bowl of cold water to stop the cooking process.  When the greens are cool, remove them from the cold water and using your hands squeeze as much liquid from them as possible.   (Can be prepared ahead to this point. Refrigerate cooked greens.)

Bring the water used to cook the leaves back to boil (top it off if necessary), add the pasta and cook until done.  Drain.

While the pasta is cooking, heat 2 T. EVOO in a large skillet or saute pan.  Add onion and pepper flakes and saute on medium heat until onion is translucent, about 5 minutes.  Add garlic and senposai leaves, breaking up the squeezed handfuls.  Saute stirring often, until heated through, another 5 minutes.

Add drained pasta to skillet and stir to combine and reheat pasta.  Add olives, feta, parsley and remaining 2 T. EVOO.   Season to taste with black pepper or cayenne (and salt, which really shouldn't be necessary unless you didn't salt the cooking water enough.)