I had planned to make Chicken Kiev for Christmas Eve dinner this year but ran out of time so I skipped the breading and deep frying and turned the filling into a sauce.  My husband was disappointed - he loves breaded deep fried food - but he appreciated that this version was much healthier, and he enjoyed it so much he had seconds!

This recipe is similar to the Chicken Meunière recipe I posted earlier. 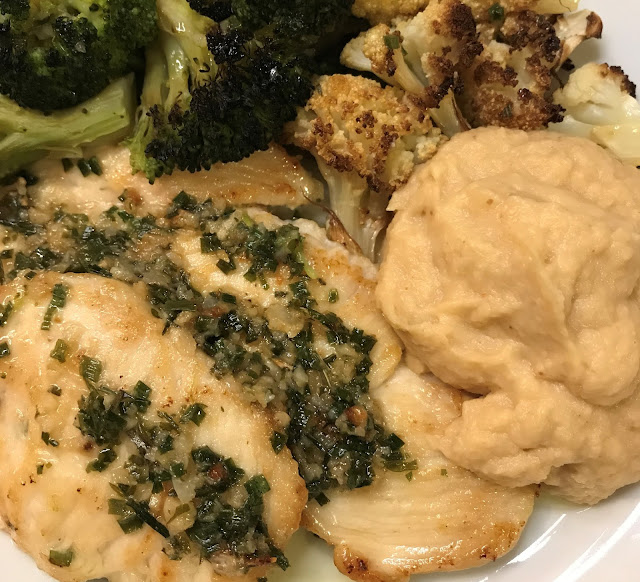 In a mortar and pestle, pound the garlic with the salt until it forms a paste.

Add the parsley and pound that to a paste.

Add the butter and pound it into the garlic and parsley.  Stir in the chopped chives and mix well.  Set aside.

If the breasts are very thick, cut the thick portion in half horizontally creating two thinner slabs. I also remove the tendon that runs down one side.  Gently pound each slab between two sheets of parchment to 1/4" thick*.  Season them with salt and pepper, then dredge them lightly with the rice flour.

In a frying pan large enough to hold both breasts, heat 2 T. ghee on medium-high.  Add the breasts and fry, turning once, until lightly browned on both sides and juices run clear when pricked with a fork (timing will depend on how thin your cutlets are).

Reduce heat to medium, add the butter mixture to the pan and stir until it melts and the garlic warms enough to take the raw taste away, 1-2 minutes.

I served them with mashed celeriac (seasoned with brown butter rather than garlic and thyme), and roasted vegetables (broccoli, cauliflower, and asparagus).   I prepared the sides first and kept them warm while I prepared the chicken because the chicken comes together so quickly.

*I have read that the giant chicken breasts sold these days have long fibers that separate when you pound them, and I noticed that parts of my breasts DID fall apart, which would have made it impossible to make traditional chicken kiev anyway.  By cutting the thick part of the breast in half horizontally into thinner slabs, the pieces should cook evenly even without pounding.

There isn't much in the farm store these days, so I've been looking for creative ways to use turnips, cabbage, and carrots.  I pulled out my Indian cookbooks to see if any of them had a turnip recipe and found this one!  It was a bit more work than I wanted to do, so I simplified it.  It was so good, I made again a week later!

This is a Kashmiri dish and the seasoning was unusual for me - it included fennel powder which I don't often see in a curry recipe.

The first time I made this, I had a small amount of arugula languishing in the fridge and I was craving something green so I chopped it up and added it to my bowl.  My husband saw what I did and wanted some, too!  We liked it so much I add arugula ever time I make this now even though it wasn't part of the original recipe. You could use baby spinach instead.

I have made this with beef instead of lamb and the seasoning works with both proteins.  My husband prefers lamb because it's tenderer (is that a word?).

Original recipe is from Great Curries of India by Camellia Panjabi

Curried Lamb with Turnips (and arugula) 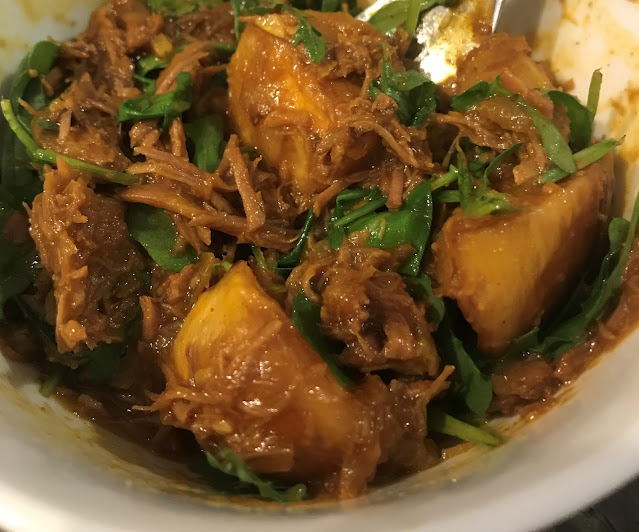 The original recipe calls for salting the turnips to remove some of the bitterness, but I've found that if you use large turnips they are naturally sweeter and you can skip this step.

She included instructions for making a quick lamb broth seasoned with garlic and bay, but I had some traditionally-seasoned lamb broth from the last time I bought half a lamb, and used that instead.  You can can get away with using water in a pinch but the flavor won't be as complex.

The other change I made was to use black cardamom seeds rather than the pods, because I didn't have any pods, and I really liked the occasional burst of flavor when I bit into a seed.  I wish I had replaced the green cardamom pods, too, because biting into one of them was unpleasant.

In a frying pan, heat 3 T. ghee and fry the turnips for about 20 minutes until they're pale gold and begin to get a crispy skin.  Remove to a plate.  (If you want, you can skip this step and add the turnips to the pan when you add the tomato and stock but they will not hold their shape as well once they're cooked - the crispy skin holds them together!)

Add 1 T. oil and saute the chopped onions for 20-25 minutes over low to moderate heat until uniformly golden brown.  If the heat is too high, they will brown unevenly.

Add the minced garlic and ginger and saute for 5 minutes.

Add the remaining 1 T. oil, all the spices, the lamb and 2 T. water and saute for 2-3 minutes.  Cover and simmer for 10 minutes until the lamb releases moisture which is then reabsorbed.

Remove the lid when the meat is almost dry.  With a cooking spoon, stir and turn the meat for 5 minutes.  Continuous stirring allows the spices to come in contact with the heat at the bottom of the pot and develop their flavor.  This is known as the bhuna process.

Season with 2 t. salt, add the tomato, and stir in the stock.  Cover and simmer for about 30 minutes.

Five minutes before the meat is tender, add the reserved turnips.

When both the meat and turnips are tender, taste for seasoning and add salt if necessary.  Turn off the heat, stir in the arugula and serve.  The turnips will absorb some of the liquid as they sit so add more water as required.

The first time I ever had 'meunière' was in a tiny restaurant on a back street in Rio de Janiero where they prepared freshly caught sole fillets table-side with their version of 'meunière' sauce.  It was out of this world!  I don't prepare fish very often - it's hard to find fresh and I'm afraid of depleting our oceans - so I devised this recipe to use the same seasoning with chicken breasts. 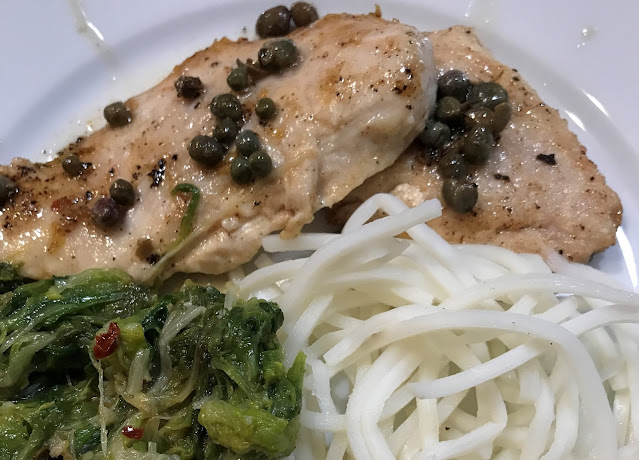 Scrub the lemon, remove the zest, and then juice the lemon reserving both the juice and the zest.

If the breasts are very thick, cut the thick portion in half horizontally creating two thinner slabs. Gently pound each slab between two sheets of parchment to 1/4" thick.  Season them with salt and pepper, then dredge them lightly with the rice flour.

In a frying pan large enough to hold both breasts, heat 4 T. butter on medium-high.  Add the breasts and fry, turning once, until lightly browned on both sides and juices run clear when pricked with a fork (timing will depend on how thin your cutlets are).

Add the remaining 2 T. butter to the pan and cook until golden, 1-2 minutes.  Remove pan from heat.

Add the lemon zest and juice to the pan (it will sputter), and stir in the parsley and capers.