I promised I would get this "recipe" on the blog today so I am publishing the basics.  I'll add better photos the next time I make it.

The best resource I've found for making RAW yogurt is here: How to Make Raw Yogurt


Here are my 'nutshell' comments:

There are two ways to introduce a starter culture to your milk:
(1) use yogurt (either purchased, like Stonyfield, or from your last batch)
(2) use a purchased granular starter (I store these in the freezer)

If you use yogurt from your last batch you will need to make yogurt every 5-7 days or the culture will lose potency.

You can make raw yogurt with either of these starters but the easiest one, that doesn't require any special equipment, is the mesophilic culture.  Purchased yogurt (like Stonyfield) is thermophilic.

Within each of the above starter culture types, there are two sub-types:
(1) single use
(2) heirloom or re-culturable

I've always used re-culturable, and found that I could re-culture 5-6 times IF I made a fresh batch every 5-7 days.


The best advice on which culture to use, to achieve the taste and texture you prefer, is here: Choosing a yogurt starter culture

Because acidophilus is not good for my blood type, I use a Bulgarian culture.  It's thermophilic.  Here's how I do it:


Gently heat the milk to 105 degrees: Using a stock pot large enough to hold 3-4 quart jars, I put the cold milk into the jars and surround them with water.  I use an ANOVA sous vide wand to bring the water temperature to 118 degrees.  If you don't have an ANOVA, let the water from your tap run until it's 118 degrees and then fill your stockpot.  It helps to have an instant read thermometer for this.

Stir the milk inside the jars every 3-4 minutes until the temperature of the milk is 105 degrees.  As the milk heats up, the water will cool down.  When the milk is between 100 and 105 degrees, stir in your starter culture.  I use 1 heaping tablespoon of yogurt for each quart.  If you're making your first batch with grains, follow the directions on the packet for how much milk each packet will culture.

NOTE: YES, you can use your stovetop to heat the milk, but it's not easy to bring it to 105 degrees without overheating it, especially on the bottom.  This method works better for me.

Start tasting the yogurt after 8 hours.  The longer  you allow it to culture, the thicker it will get, and the more sour it will become.  It will also have more active cultures.   I like it best after 8-9 hours, but I've left it as long as 12.

Because you're using raw milk, the yogurt will not be as stiff as that made with pasteurized milk.

If this bothers you, drain the yogurt for 1-2 hours: line a strainer with cheesecloth or muslin, set the strainer over a bowl, and dump the yogurt into the cheesecloth.  Whey will drip into the bowl (keep this, it's very healthy!) and the yogurt will become stiffer.  When it's the consistency you like, transfer it to a glass jar and refrigerate.

If you're using an heirloom starter, you will need to make a fresh batch every 5-7 days.  I've tried freezing the yogurt and then re-culturing it, but it didn't work.  If we go on vacation, I have to start with a new culture.

If you use a mesophilic culture, follow the directions on the packet.  You won't need to heat the milk but your room's temperature will need to be between 70-77 degrees, so you won't be able to make it during the winter.

This website Probiotic Yogurt lists the following as THERMOPHILIC:

In the photo below I've stirred several capsules of plantarum, rhamnosus, and boulardii into my starter culture which I then used to inoculate my milk.  The empty capsules are at the top of the photo, the plain yogurt in the center, and the yogurt with the additional probiotics at the bottom. 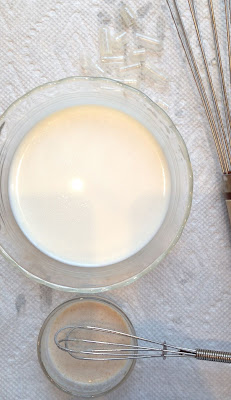