Yotam Ottolenghi posted the original recipe for this on his Instagram page and I was drooling!  I made it a few days later, replacing the olive oil with ghee.  I also added some lamb, because lamb and lentils go well together and I wanted to serve it as our meal.

The leeks and lentils are delicious on their own, but the leek cream takes them to the amazing level!

I followed the recipe mostly as written, but I suspect it would be just as good with any other bean, and much easier if you use canned!  I also suspect you don't have to baby the leeks they way they describe in the original recipe.  I'll post photos the next time I make it.

Preheat oven to 350F.  Melt the ghee in an 8" x 12" baking dish while the oven is preheating. (I made this in our toaster oven, which was exactly the right size,)

Slice the leeks into 1/2" pieces.  Arrange the leeks cut side up in the preheated baking dish and nestle the garlic between them.  Baste the tops with some of the melted ghee.  Sprinkle with thyme, salt and pepper.

Cover the top with a piece of parchment paper, then cover the dish tightly with foil and bake for 30 minutes.  (The parchment prevents the foil from touching the food.)

Remove the dish from the oven, remove the foil, and gently turn the leeks over using 2 forks or a pair of tongs.  Replace the foil cover and bake for another 30 minutes, until the leeks are completely soft.

Remove the dish from the oven and transfer 1/2 cup of cooked leeks and 5 cloves of garlic to the bowl of a food processor.  I transferred the light green leeks and left the white ones.

Add the drained beans (and the lamb if you're using it) to the pan with the leeks, season with salt and pepper, and toss gently to combine.  Return to the oven and bake for 15 minutes to heat the beans.

While the beans bake, make the leek cream: add the cream, mustard, 1 T. lemon juice, and 1/2 t. salt to the leeks and garlic in the processor bowl and then puree until smooth. 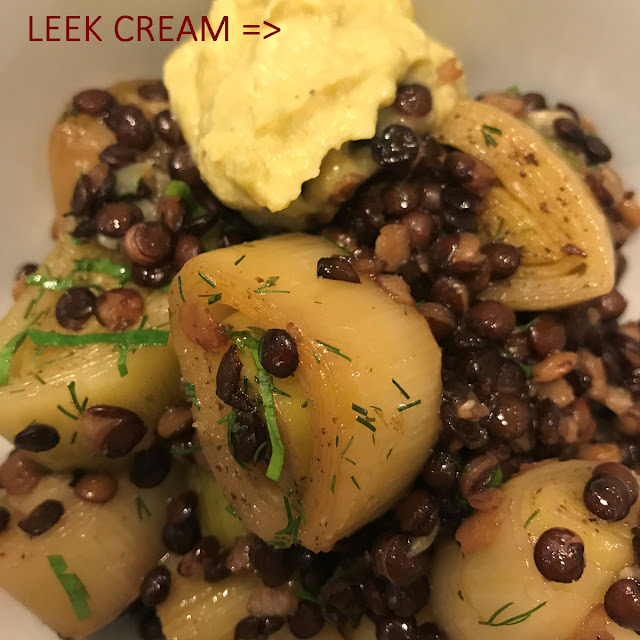 Remove the pan with the leeks and beans from the oven, stir in the remaining 4 T. lemon juice, and sprinkle with the herbs.  Stir gently to combine.  Serve alongside the leek cream.

In the photo below I stirred the leek cream into my portion.