Honestly, I had no idea Sunshine kabocha was SO TASTY!   It's a richer color than blue kabocha, and denser than regular pumpkin so you don't have to evaporate excess liquid before using it.  It's little too dry for pumpkin pie (Butternut is actually best for that) but it's wonderful for everything else!  I've used it to make gluten free pizza/tart crust, in Pumpkin Martini's, and in this easy soup.

Although blue kabocha is a long-keeper, sunshine kabocha is more perishable so I've been roasting it, pureeing it (I use a food processor and I remove the skin first), and then freezing it (new canning rules advise against canning pureed pumpkin).  I freeze it in pint jars since it's so dense and a little goes a long way.

I cut each pumpkin into quarters, brush the cut sides with melted ghee, and then roast at 400 for about 40 minutes, rotating the pan halfway through.  I let it cool in the oven,then remove the skin and puree in the processor.  Here's what it looks like pureed.  Isn't that a beautiful color?!: 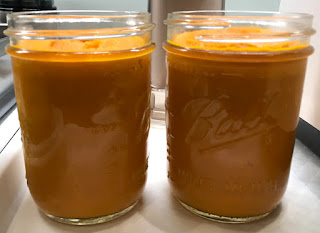 This time, I made little divots in the top to see if that would result in a level surface once frozen, since it always seems to bulge up in the middle.  I'll report back shortly on whether that worked.... 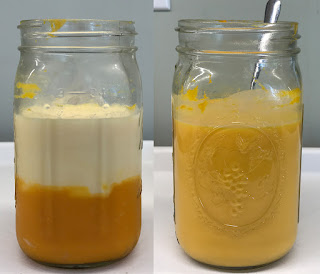 
Mix sunshine and milk.  Season to taste with salt and hot sauce.  Heat and serve.  (I eat it cold, right out of the jar!)

I have been roasting 3-4 squash at a time (I pile the slices on top of each other if they don't fit flat in the pan) so I've been putting large amounts of pumpkin seeds in the trash.  We don't compost these because we've heard they survive.

Well...two days ago something turned our trash bin on its side, extracted the ONE bag with the seeds in it, ate them, and then wandered off, leaving large footprints behind.  We're sure it was a bear, and the only way we know it was after the seeds is that it missed one. 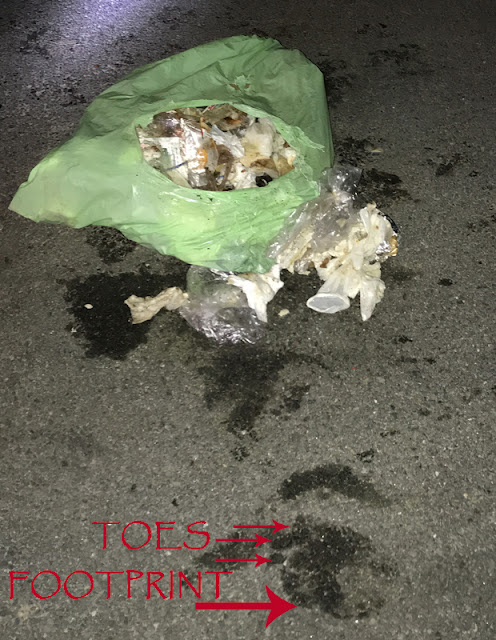