Here's another refreshing cucumber salad that my husband deemed, "just as good as the sweet-sour one but in a different way."  This one is smashed, rather than sliced, and seasoned with sesame oil and garlic.  I cut the recipe in half and used pickling cucumbers. 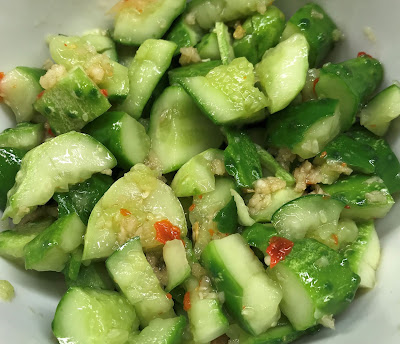 
Wrap the cucumbers in a dish cloth, place on a cutting board, and pound with a flat object (I used my meat pounder) until they break.  Unwrap, transfer to cutting board, slice each one lengthwise, than in half lengthwise again.  Slice into 1" pieces.
Transfer to a strainer set over a bowl.  Mix with sugar and salt and leave to drain for 40-60 minutes.

Whisk together the garlic, vinegar, tamari, sesame oil, and red pepper flakes.  Transfer cucumber to a bowl and mix with the sauce.  Refrigerate for at least 30 minutes for flavors to mingle.  Sprinkle with toasted sesame and serve.