In searching for a vegetarian risotto made without the umami of meat broth, I made this one (almost) exactly as written and was disappointed.  As the author says, the end result is very watery and needs the egg yolk to firm things up.  I didn't believe her - I've never made watery risotto - and I thought she must have done something wrong.

So... I made the recipe, except that I didn't add the miso until the end, reasoning that since it was 'raw' I didn't want to cook all the goodness away.  Up until that point, the risotto was perfect!  As soon as I stirred in the miso, the whole thing broke down into a watery mess!!!  There must be something in the miso that interferes with the starch in the rice.

I didn't want to use the egg yolk to thicken the mess, so I strained the rice out of the pan, reduced the liquid, and poured it over. The meal was salvaged but I wasn't going to make that recipe again!


Fast forward two weeks I had some beef broth made from 4 ribeye bones and trimmings, plus the fat skimmed from that broth.  I still had turnips but no greens; however, I did have arugula and thought it would make a good substitute.  I also had some garlic scapes, since I had just processed them for the freezer, and I had some leftover sauteed onions.

When I went out to harvest some rosemary I discovered we didn't have any, but we did have tarragon.  Another substitution.  This is how I 'develop' a recipe....

Fortunately, the end result was so good my husband asked me to save the recipe!  I think it would be just as good without the ribeye meat but NOT without the broth. 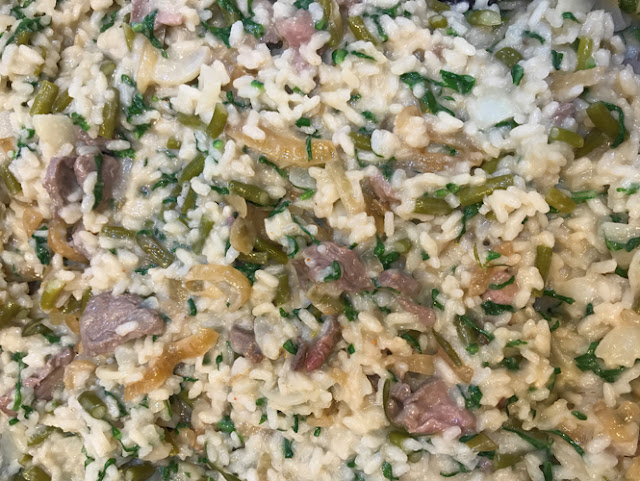 In a large saute pan, melt 2 T. fat over med-high.  Add ribeye and stir for 1-2 minutes until cooked medium-rare.  Remove to a bowl and set aside.

Add the onions and saute them until softened and lightly browned.  Remove to the bowl with the meat.

Add 2 T. fat to the pan, add the garlic scapes, and saute until lightly browned. (If you're using garlic instead of scapes, saute on medium-low so it doesn't burn).

Reduce heat to medium, add the rice to the pan and stir constantly until opaque, 3-4 minutes.

Add 4 cups of the broth, 1/2 c at a time, stirring constantly after each addition and adding more when you can see the bottom of the pan as you stir.  Rice should now be half cooked.  Turn heat to low.

Add the remaining 4 cups of the broth, 1/2 c at a time, stirring constantly after each addition and adding more when you can see the bottom of the pan as you stir.

The rice should now be cooked and surrounded with a creamy 'sauce'.  Turn heat to low and stir in the arugula.  Add the reserved beef, sauteed onions, and the cream/parmesan.  Stir to combine, adjust seasoning, and serve.

*The best risotto is made with beef broth, usually the broth from a pot roast.  This broth is almost clear and adds no color to the rice, unlike the veal demiglace I normally use which turns it light brown.  To make the broth, I covered the raw bones and trimmings with RO water, added a pinch of salt and 1 t. ACV, brought to a simmer (don't let it boil!), simmered on low for 24 hours and then strained.

**I usually use cream instead of parmesan because cream is easier (no grating) and I can get healthy raw cream from our farm.  We think it tastes just as good.