A few weeks ago I attended one of our farm's classes where another attendee (Lisa W-B) brought a delicious chickpea and coconut stew to the potluck.  I Googled for the recipe and found this one, that was similar.  The stew brought to the potluck did not contain turmeric so you could safely leave that out.

I made it using farm spinach (canned last summer) and reduced the amount of coconut milk for a thicker stew.  It's a super easy recipe, one that I'll be making often with different greens. 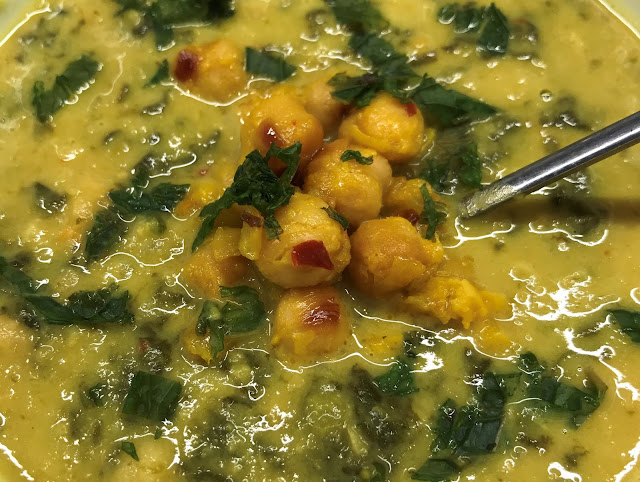 In a medium dutch oven on med-high, heat the oil and saute the onion until translucent and lightly browned, 3-5 minutes.  Add the turmeric, pepper flakes, and one cup of the garbanzos.  Season with salt and saute until the beans are starting to brown.  Remove the beans and reserve for garnish.

Add the garlic and ginger to the oil and saute for 10 seconds.  Add the remaining garbanzo beans, the coconut milk, and the broth.  Scrape up the garlic if it stuck to the pan.  Bring to a simmer and cook for about 20 minutes until the beans are soft and have absorbed the flavors from the broth.

Using an immersion blender, puree half of the soup.  Don't puree the whole pot - you want some texture.

Stir in the greens and cook until they soften, 3-7 minutes.