We haven't had pork tenderloin in a long time, so I made this to illustrate the technique I use for making a gluten free cream sauce. 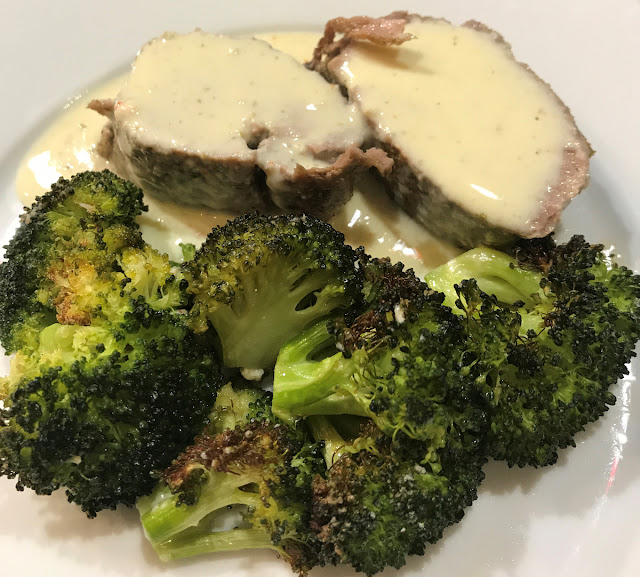 
Preheat oven to 400F.  (I make this in our convection toaster oven.)

Combine the rosemary, garlic and cayenne in a small bowl.

In a shallow roasting pan, rub the EVOO over the pork, then salt the tenderloin on all sides.  Sprinkle it with half the seasoning mix. 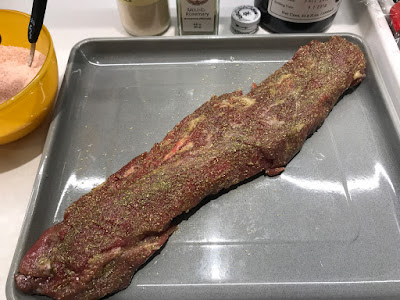 Roast for 16-18 minutes.  Pastured pork tenderloins are generally small, and we like our pork medium-well so I cook them for 16 minutes.  If  you prefer well done, leave it in for 18 minutes.

Remove from the oven, tent with parchment paper, and let rest for 5 minutes.

While the pork is cooking, make the sauce:

In a medium sauce pan - yes, you need such a big pan because THE CREAM WILL BUBBLE UP TO THREE TIMES ITS ORIGINAL VOLUME - combine the cream with the remaining seasoning mix.

On medium heat, bring the cream to a boil.  THE CREAM WILL BUBBLE UP TO THREE TIMES ITS ORIGINAL VOLUME!  Stir occasionally and adjust the heat so it doesn't boil over.  In the photos below you can see it's nearly boiling over!!

Add salt to taste, and keep warm on low heat until the pork is ready to serve.  Stir occasionally to prevent a film from forming on the top.

Slice the pork into 3/4" pieces and serve, draped with the sauce. In the photo below, I filled the small pitcher with sauce, and poured what didn't fit in the pitcher over the meat.  I served it with roasted broccoli, but the sauce would be just as good with asparagus or green beans.

My husband likes to use the leftover pork in a sandwich so I only served half of it for dinner and there was one small bit left! 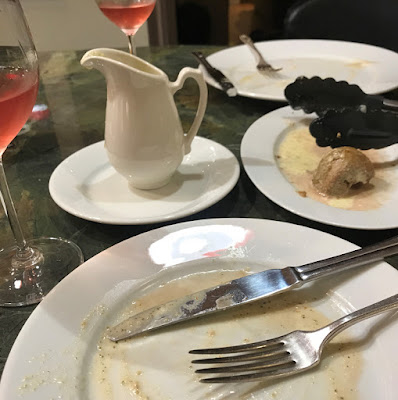