Every now and then, I crave something 'fancy' for dinner, and came up with this recipe as a way to use up some asparagus that was languishing in the fridge.  Compared to the recipes I researched, this one is on the easy side. 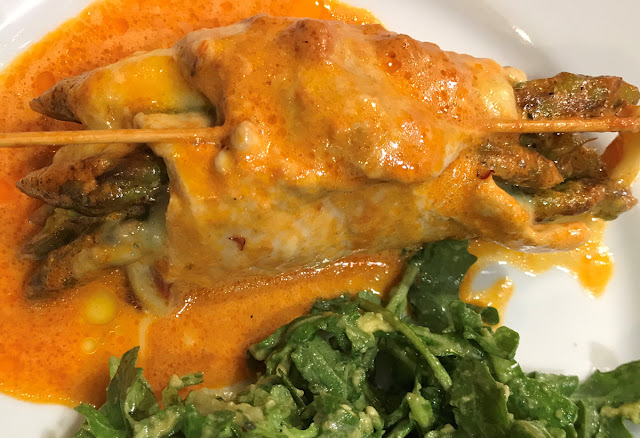 
Before I prepare any recipe with raw chicken, I put down a piece of plastic wrap on which I do all my prep work.  I then fold it up and toss it, to prevent bacteria from contaminating my cutting board.

Pound the chicken breasts to and even 1/4" thickness.  Snip the tendon every 1/4" to prevent it from contracting when it cooks. 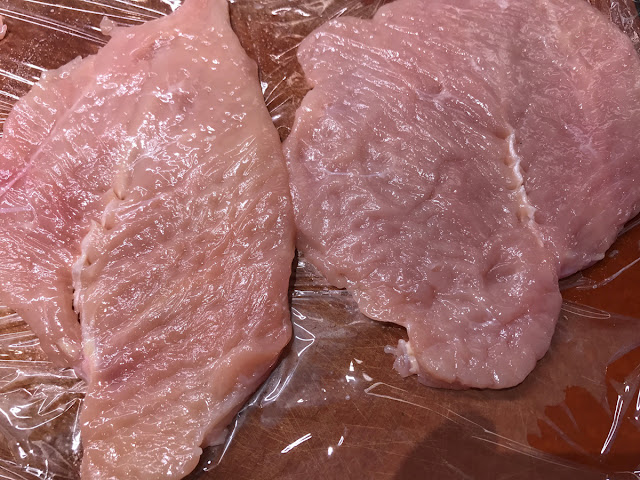 Place 5 asparagus spears in the center of each breast and then fold the ends in, overlapping them.  Secure the ends with a toothpick or skewer. 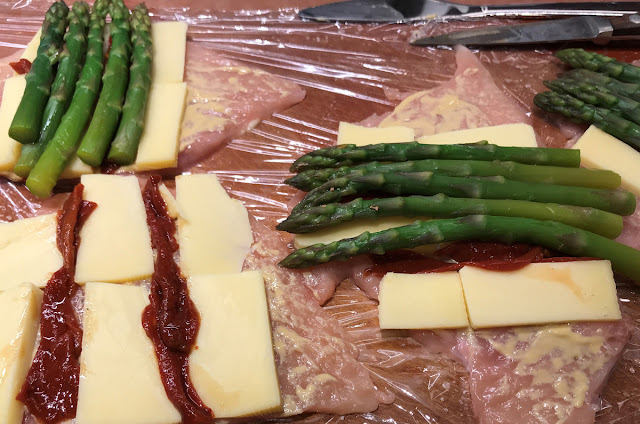 In an oven safe casserole large enough to hold all 4 roulades (I used a 3-quart oval Le Creuset), melt the ghee on medium heat.  Add the roulades, toothpick-side UP, and brown the bottoms, about 5 minutes.


DO NOT TURN THEM!  You'll just make a mess, the cheese will stick to the pan, and browning the other side won't add much to the end result.

While the roulades are browning, add the cream and the remaining pimientos to a 1-pint ball jar and use an immersion blender to puree the pepper.  STOP when the mixture starts to thicken or you'll end up with butter!  (In the photos below, I used 1 cup cream and it was way too much!  1/2 c is plenty.)

Pour the cream over the roulades, cover the pot, and bake them for 15 minutes.


The sauce will separate but it will still be delicious!   Remove the skewers and serve!   I served them with arugula salad with avocado dressing (avocado, EVOO, balsamic, and red onion).