I made merguez meatballs for dinner last night, and wanted a salad to accompany them.  When I stumbled on the above recipe that would use up the oranges DH bought last week, AND the last few roasted pistachios, I had to try it.  I was serving rice with the meatballs so I omitted the bulgur.

The salad tasted delicious, but I wasn't happy with the directions.  Processing the orange in my food processor made a HUGE mess and it never got creamy.   I also needed to double the amount of EVOO and ACV for the size of my orange.

The next day, an immersion blender did a better job on the leftover dressing than the food processor had done, and with no mess, so I will use it in the future.  I heated up a few meatballs and served them with the salad for lunch.  The meatballs are spicy and the salad was a nice light counterpoint. 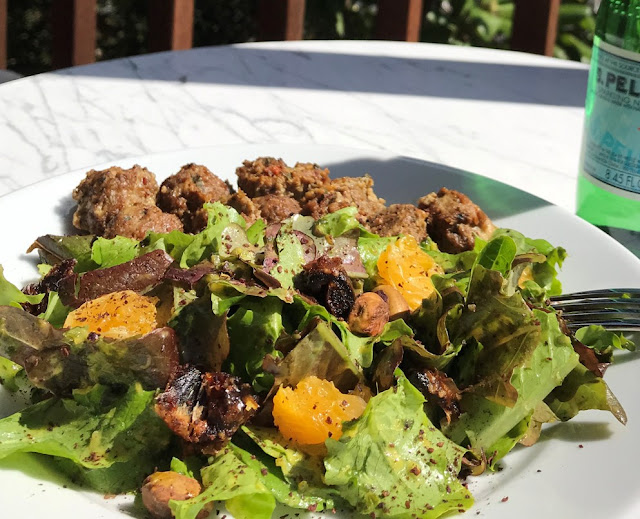 Check the halved orange for pits and remove them.  Combine the first 4 dressing ingredients in a blender and puree.  Or, use an immersion blender and a 1-pint jar.  Add the chopped cilantro and pulse to blend.

If your dates are old, cover them with hot water for a few minutes to soften them.  Chop into 3/8" pieces.

*To make orange supremes: cut away the orange peel with a serrated knife, and then separate the orange segments by cutting between the white membranes.  Cut each supreme in half.  If this is too much work, peel the orange and separate the segments, then cut each one into thirds.


Toss all the salad ingredients in a bowl and drizzle with dressing.  Sprinkle with sumac and serve immediately.

Extra dressing can be refrigerated for several days.