This recipe also got rave reviews from everyone present at our Christmas celebration.  It looks beautiful, especially if you use blood oranges, and the flavor and texture are sublime.  I assembled them right as everyone arrived because I was worried the endive would become bitter as it sat, but I tasted one after everyone left and it wasn't bitter at all, so these CAN be assembled up to an hour before they're consumed.  The endive will loose it's crispness if it sits much longer. 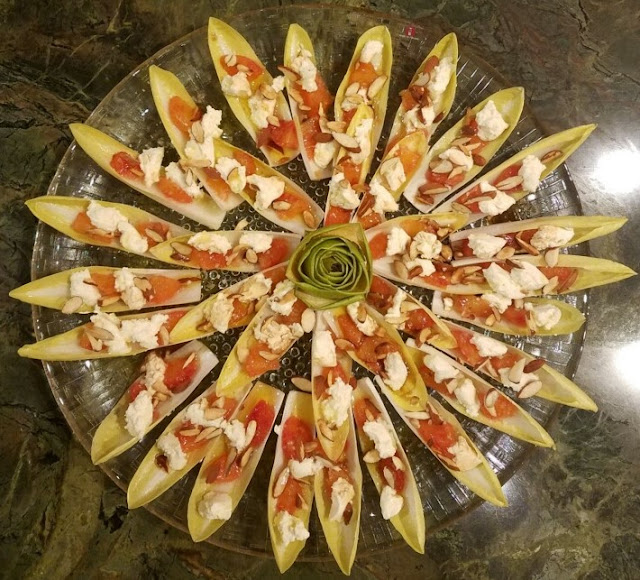 Serves 4 as an appetizer

Make the orange supremes: Cut the ends off the oranges and then cut away the peel to expose the flesh.  Holding the orange over a bowl to catch the juice, cut alongside each membrane separating the segments and release them from the pith.  Cut each segment (it's called a supreme) 2 or three pieces.  You'll only be using the orange segments but the juice is delicious so reserve it for something else, like mimosas!

Separate the endive spears and arrange them on a platter.

In each spear, place 2-3 pieces of orange, 2-3 dabs of quark, and a sprinkle of almonds.

Drizzle a thin stream of EVOO over all, and then add a few drops of balsamic to each boat.

Sprinkle with flake salt and serve.

(The apple rose in the center was made from the peel of the apple I used for the Curry Mayo Sauce.  You could also use the peel from the oranges.)

And ... that recipe inspired me to make a third version with pears, sun dried tomatoes, walnuts and quark (because I'm allergic to the mold in blue cheese).  I drained the tomatoes and mixed the EVOO with balsamic to create a 'dressing'.  After cutting the pears into 1/2" pieces, I mixed them with that 'dressing' to prevent them from discoloring.  My husband thought the pear version was just as good as the orange version and polished off the plate while I prepared the rest of the meal:

NOTE:  For New Year's Eve, I tried to simplify this by making it a mixed salad.  My husband enjoyed it even though it's "not the kind of salad he normally likes," but I thought it was more successful as canoes because every mouthful included some of each of the components.  It's also much prettier as canoes.  Here's a photo as a mixed salad: 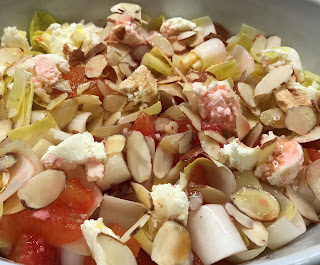